Perhaps no other team in the Redline Time Attack (RTA) Series Modified Rear Wheel Drive Division chase has come so far, so fast, as Tanaka Racing. In its debut in 2010, Tanaka Racing with it's Nissan S13 and driver Jacob Tanaka shocked the Time Attack fraternity with a 3rd place finish at Willow Springs Raceway as a rookie team.

Founded by Team Owner Sharon Tanaka and Team Manager Dwight Tanaka, Tanaka Racing entered the 2011 Redline Time Attack Series with the goal of showcasing the most eye-catching, spectacular and crowd-pleasing car ever to compete in the RTA. The Team's 825 horsepower Tanaka Racing Corvette with its distinctive Banzai graphics, mutant Japanesse Koi graphics and vibrant red paint job accomplished this goal by wowing the crowds and winning the Modified Rear Wheel Drive Championship during the 2011 season.

Sharon has been involved in motor sports for nearly 35 years, learning about the inner workings of all forms of auto racing, including Indy Car, Champ Car, CART, NASCAR, IMSA, Formula 1, NHRA, Formula D and SCCA Pro Racing. Her passion for the sport is what motivated her to form Tanaka Racing, and with more than twenty years of involvement in the sport she has gained the valuable experience necessary to become one of the first female championship team owners.

Dwight Tanaka has a long history in motor sports including having competed in the NHRA. Currently, he is the VP/Director of Operations for the Grand Prix Association of Long Beach, where he has worked for 41 years. He has had a long and successful association with Formula 1, NHRA, Champ Car, CART, SCCA Pro Racing, NASCAR, ALMS, Formula D and IRL since 1968. 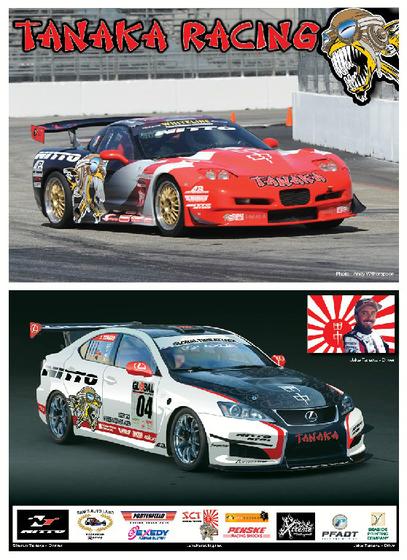